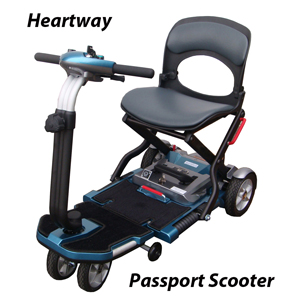 There are two groups of compact scooters. There are those that disassemble for transporting and others that collapse and fold but remain in one or two parts. This article focuses on Folding Mobility Scooters.

Folding Mobility Scooters (FMS), are light weight, collapsible and convenient to use, mostly by persons who have difficulty walking. They are compact enough to be carried in the trunk of most cars and weigh, with batteries, about 60 lbs. Because they emphasize compactness, they fall short in comfort, maximum weight capacity and distance between charges compared to heavier and larger scooters. This report focuses on five different scooters—Lexus Light, Passport, Mobie, Luggie and EV Rider Express

The Lexis-Light is one of the world's most stable scooters available due to its amazing engineering and four point seat structure. Most all scooters have a center seat post for the seat to be attached. That designed becomes very unstable on inclines due to the center of gravity. The Lexis-Light four point design gives you 45% more stability on inclines than a scooter that uses a center seat post. Also, it’s designed with two front wheels close together making it more stable than a three wheel scooter.

There are two options for carrying this scooter. You can either fold it and keep it together, or take it apart in two pieces, each weighing 26 and 28 lbs. Other options include keyed ignition, adjustable folding tiller, front wheel drive, a basket, car charger, and a two year warranty for parts.

The Passport is a light weight folding scooter from Heartway USA that can be bought with either lithium (Li) or sealed lead acid batteries (Pb). The scooter weighs about 60 lbs. with Li batteries and 71 lbs. with heavier Pb batteries. It has a long wheelbase with two wheels in front and two in back and more leg room than many larger scooters. It’s very easy to fold and unfold and as easy to pull through an airport as a large piece of luggage.

The maximum battery range between charges is 12 miles with Li and 8 miles with Pb batteries and can carry a load of 250 lbs. The seat is 16” wide and is supported in four corners and folds down into the base. The Passport has a fairly high ground clearance of 2.5 inches because of the large wheels, (7” front and 8” rear) which means it can easily go over thresholds and curbs that other scooters may find difficult. It is very maneuverable with a turning radius of 32”. It comes with an ignition key and a lock to secure the battery box. A cane holder, canopy and rear bag, O2 tank holder, are some of the accessories that are available at additional cost.

This scooter is another folding lightweight scooter made by Solax. With the Li battery, it weighs only 54 lbs. Unlike the two scooters above, there is no option to purchase a less expensive sealed lead acid battery. There is however, a compartment on the scooter to store a second backup battery which doubles the distance you can travel before recharging. The Mobie has four wheels in a rectangular configuration, as compared to the Passport, which has two front wheels placed close together. The manufacturer claims that the wider stance of this scooter is more stable than those with front wheels that are closer, however, none of them have been tested for stability. The Mobie is capable of carrying a person and gear that weigh up to 300 lbs. But be aware that with heavier loads, the distance the batteries will last and the speed may be lowered.

The Luggie comes in three variations: The Standard, the Deluxe and the Elite. It comes in six colors, champagne, black, pink, blue, black and yellow. It is available with or without armrests. It weighs only 56 lbs. with the battery and can hold up to 250 lbs. The seat width is 14.5 inches narrow and can muster a top speed of 4 mph and go a maximum of 11 miles on a charge. This scooter does not come with an ignition lock. It is a competent but expensive scooter.

The Luggie Elite can go a little faster, and a little farther between charges and has a capacity of 320 lbs. Included with the Elite are armrests, lithium battery, charger, under seat bag and shipping.

The Transport is another easy to fold up compact scooter that is available with either lead acid, or lithium power. Like the Lexus Light, it is a four wheel scooter with the front wheels very close to each other. This affords the scooter the advantage of a three wheeler and the stability of a four wheeler. It weighs 70 lbs. with the Pb batteries and 60 lbs. with Li batteries. The manufacturer advertises that it can go up to 15 miles on a single charge and can transport up to 250 lbs. Blue is the only color available. The warranty covers parts only for one year and the battery for two months. 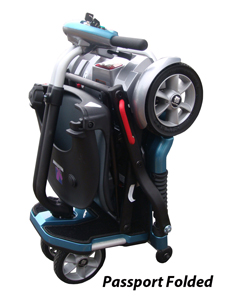